From the right, Ms. Younas before and after she was disfigured in an acid attack that she blamed on her then-husband. 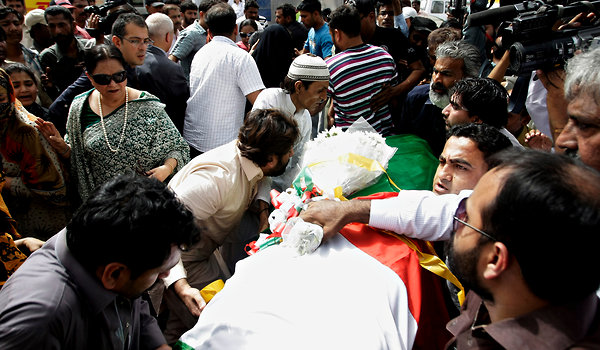 The coffin of Fakhra Younas after its arrival in Karachi, Pakistan, in March. Ms. Younas, who jumped to her death from the balcony of her apartment in Rome, was the victim of an acid attack 12 years ago for which her ex-husband was acquitted.
KARACHI, Pakistan — Fakhra Younas went under the surgeon’s knife 38 times, hoping to repair the gruesome damage inflicted by a vengeful Pakistani man who had doused her face in acid a decade earlier, virtually melting her mouth, nose and ears.

Relatives of Fakhra Younas in Karachi, Pakistan, last month. The man Ms. Younas long accused of dousing her with acid, her ex-husband, Bilal Khar, was acquitted at trial nine years ago.

The painful medical marathon took place in Rome, a distant city that offered Ms. Younas refuge, the generosity of strangers and a modicum of healing. She found an outlet in writing a memoir and making fearless public appearances.

But while Italian doctors worked on her facial scars, some wounds refused to close.

On March 17, after a decade of pining for Pakistan, a country she loved even though its justice system had failed her terribly, Ms. Younas climbed to the sixth-floor balcony of her apartment building in the southern suburbs of Rome and jumped. She was reported to be 33 years old.

News of her death filtered back to her home city, Karachi. And by the time her coffin arrived for burial, a storm of outrage had been whipped up — one framed by a glittering Hollywood success.

On Feb. 28, Sharmeen Obaid-Chinoy, a Karachi filmmaker, won Pakistan’s first Academy Award, for “Saving Face,” a documentary that focuses in gritty detail on victims of acid violence like Ms. Younas. Despite the film’s disturbing topic, the Oscar gave Pakistanis a welcome shot of national pride, while focusing attention on a social ill.

Acid is the preferred weapon of vindictive men against women accused of disloyalty or disobedience. Common in several Asian countries, acid attacks in Pakistan grew sharply in number in 2011, to 150 from 65 in 2010, although some advocacy workers said the increase stemmed largely from better reporting.

The death of Ms. Younas galvanized the Pakistani news media. In Parliament, lawmakers vowed to take action, while one political leader called for a criminal investigation into the case to be reopened. But legal experts were skeptical that would happen, because the man Ms. Younas long accused of the attack — her ex-husband, Bilal Khar — was acquitted at trial nine years ago.

Unlike most men accused in acid attacks, Mr. Khar comes from a wealthy, powerful background. His family owns vast swaths of rich farmland in Punjab Province; his father, Mustafa, is a former provincial governor; his first cousin Hina Rabbani Khar is Pakistan’s foreign minister. In recent weeks, Mr. Khar appeared on television several times to defend his reputation. “My hands are clean,” he said during one broadcast.

The appearances won him little public sympathy, with critics saying that the case exemplified how Pakistan’s rich frequently evade justice. Yet there was a ringing contrast between the howls of condemnation and the virtual silence that greeted Ms. Younas after she was attacked a decade ago. And it raised a question: When this clamor has receded, will Pakistan’s next acid victims stand a better chance of obtaining justice?

Deep-rooted social prejudice and misogyny were part of her story. Born to a heroin-addicted mother on Napier Road, Karachi’s red-light district, by puberty Ms. Younas was a working “dancing girl” — a euphemism for prostitute. She had a son when she was a teenager. Then, in 1997, at 18, she achieved the vice girl’s version of the Pakistani dream: she married a client, Bilal Khar, who came from the other side of the tracks.

But the marriage collapsed after three years, amid allegations of domestic violence, and Ms. Younas fled to her mother’s home on Napier Road. She was sleeping there in May 2000 when two men burst into the apartment; one cast a bottle of liquid over her face and chest. Ms. Younas struggled and screamed, but it was too late: the acid fused her lips, melted her breasts and destroyed one eye. During a three-month stay in a hospital, she came close to death.

“She had two little holes for her nostrils, and her mouth was so melted that only a straw could fit in,” said Tehmina Durrani, a prominent Lahore figure who championed the case. Ms. Durrani had her own reasons for tackling the Khars — she had divorced Bilal’s father, Mustafa, and had written a searing memoir of the marriage titled “My Feudal Lord.”

Other Pakistanis, however, showed little interest in the case. Newspapers, even liberal ones, gave the story scant coverage. Gen. Pervez Musharraf’s government dragged its heels over issuing a passport to Ms. Younas, concerned that the case would hurt Pakistan’s image.

Mr. Khar went on the run, and was declared a fugitive in early 2002. But when the trial started a year later, after Mr. Khar had been caught and arrested, the case quickly crumbled. Although four witnesses testified to seeing him enter Ms. Younas’s home the night of the attack, all later retracted their statements. Earlier, they had complained of intimidation by Mr. Khar, but the judge paid little notice, and in December 2003 he dismissed the case.

In one recent television interview, Mr. Khar described himself as the victim of a “media trial.” He pleaded for privacy to protect his three daughters, who, he said, were facing awkward questions over the case at school.

“You should be considerate about that,” he chided the host.

Ms. Younas was not present for the acquittal in 2003; she had left for Rome with her son, Noman. There, over a decade, she slowly rebuilt her life. The Italian government granted her political asylum; the city authorities offered her an apartment; and a Milan cosmetics company paid for her surgery.

Dr. Valerio Cervelli, a plastic surgeon who led the work, said it was difficult at first “because her lower lip was attached to her torso, she had no neck, and her eyes were permanently open.” Complicating matters, she ignored postoperative advice. “She was so headstrong, so independent,” he said.

Still, things improved: by the 38th operation, in early 2011, Ms. Younas could move her mouth and one eye. Her once strikingly beautiful face, although still charred, had regained some of its shape. She had learned Italian, befriended local traders and co-written a memoir, “Il Volto Cancellato,” or “The Erased Face,” which brought in some income.

She ventured outside fearlessly, armed only with a bawdy sense of humor ingrained on the streets of Karachi. During a soccer match in Rome, when the noise grew too loud, Ms. Younas turned to fellow fans and “threatened to throw her false ear at them,” Ms. Durrani recalled with a chuckle.

But the grueling operations extracted a heavy physical and psychological toll, said Rachele Bonani, an aid worker who helped her. And, Ms. Bonani added, “she always wanted to go home.” But a return to Pakistan was out of the question for Ms. Younas, partly for security reasons: friends worried that her life would be in danger.

She vented her frustration at the local Pakistani Embassy. About two years ago, according to several accounts, Ms. Younas turned up, demanding to meet the ambassador. A heated confrontation developed during which “security was called,” a senior embassy employee said in an e-mail. The official, who spoke on the condition of anonymity, said that Ms. Younas was persuaded to leave the building voluntarily; Ms. Durrani insists that she was forcefully ejected by the Italian police, who later apologized.

Since Ms. Younas’s death, those close to her have recalled signs of deep-rooted depression. Her son, Noman, said he was not surprised by the suicide, because she had tried twice before to kill herself.

“It was a bad time for her, because of a lot of things,” he said in a telephone interview. “I guess she had her reasons.”

Now in his first year of high school, Noman, 15, is in the care of an Italian family. He says he does not intend to return to Pakistan.

Pakistani advocacy workers point to promising signs that future acid victims will be treated better. Legal reforms enacted last year mandate stiff penalties, including a minimum 14-year sentence and a one million rupee ($11,100) fine for attackers. A new Acid and Burn Crime Bill, due to come before Parliament soon, provides for better police investigations, trials and victim treatment. Further off, there are plans to regulate the sale of nitric and hydrochloric acids.

Some experts, however, worry that a notoriously weak police force and lower-court system in Pakistan could undercut any legal revolution. “It’s a systemic problem,” said Faisal Siddiqi, a lawyer who works with acid victims. “Regardless of the laws you bring, if you are poor and a woman, you will not get justice from the courts in Pakistan.”

Ms. Younas never saw “Saving Face,” but was buoyed by the acclaim it received, friends said.

On Monday, Ms. Obaid-Chinoy, the filmmaker, said: “The tragedy is that it took a film and a suicide to bring the problem of acid violence to the national consciousness. Sometimes it takes extremes for a nation to wake up to what’s wrong within its borders.

“Now I just hope that the man who is responsible for this will face justice,” she added.

Despite the film’s success, Ms. Younas’s friends say it could not overcome her sense of isolation, heightened by the pain that the attacker who had stolen her beauty and crushed her life remained free.

“Had she been a politician’s daughter or a general’s daughter, then we would have seen what would have happened,” Ms. Durrani said. “But who was going to fight for a dancing girl?”

This article has been revised to reflect the following correction:

An earlier version of a web summary on this article said incorrectly that the attack on Fakhra Younas was ten years ago. It took place in May 2000.