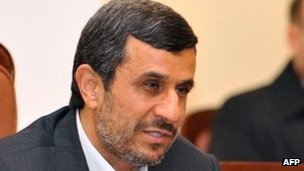 Iranian President Mahmoud Ahmadinejad has hit back at the US, after Washington introduced new sanctions against Iran’s central bank.

The sanctions – which cut off from the US financial system foreign firms that do business with the central bank – are part of a defence bill signed by President Barack Obama on Saturday.

They will take hold after a warning period of up to six months.

According to a statement quoted by the state-run Irna news agency, Mr Ahmadinejad said the central bank was “the backbone” of the country in facing outside pressure should have the strength and confidence “to thwart enemy plans”.

The new US sanctions come at a times of heightened tension over the Iranian nuclear programme.

Western powers say Tehran is seeking to acquire a nuclear weapons capability, but Iran insists the programme is purely for energy and medical purposes.

There have been concerns that the sanctions against the Iranian central bank could force up the price of oil.

The bill, which was passed by wide majorities in both houses of Congress, gives the president the power to grant a six-month grace period to give oil markets time to factor them in.